Typecasting in C: Under the Hood with ARM Cortex-M4 Assembly

There are various sizes and formats in which data can be natively represented in the C language e.g. char, int, float etc.

Often a C program will have to convert (cast) data from one of these types to another. This may be an explicit cast which the user has requested or it may happen implicitly.

I’ve been wanting to dip my feet in ARM assembly for sometime and decided a brief investigation into how the compiler implements type casting would be a gentle introduction.

The following GCC command was used to compile most of the examples here:

When floating point data types were used the following switch was provided in addition to the above to specify that software floating point should be used:

and when the hardware floating point unit was desired the following switch was specified:

The assembly snippets listed below were generated using the following version of GCC, which was readily available on Debian 8:

Integer to Integer - A First Glance at Assembly

The following (pointless) function simply copies the value of one integer to another.

This was compiled with the GCC command stated above to generate an assembly listing. The generated assembly can be logically divided into five sequential sections which can be found below.

I wasn’t quite sure what I was expecting, but was a little surprised to find that a significant part of the output was assembler directives rather than instructions (the fact the function is 2 lines long had a lot to do with this). Directives are the keywords which are prefixed with a . and are used to specify various configuration settings to the assembler.

The following links contain more information/documentation on some of the different types of assembler directives:

If you are curious, the following links contain more information on the different types of assembler directives:

The first half of the generated assembly file relates to the generated output as a whole. It contains a large listing of assembler directives whose meaning varies from obvious to obscure.

The eabi_attribute directives are some of the more obscure. After briefly decoding a few of them I decided their meanings weren’t relevant enough to bother including here. For those interested, you can refer to section 2.5 of Addenda to, and Errata in, the ABI for the ARM® Architecture (ARM IHI 0045E) where they are referred to as tags.

Each generated subroutine then has its own set of attributes which precede it:

At roughly halfway in the assembly file, we reach the more interesting stuff - the generated assembly instructions of the test() function.

The behaviour of this routine is explained below.

The test subroutine ends with the following line:

The file closes with the .ident directive:

What is the Subroutine Doing?

The following list and diagram are an instruction by instruction explanation of the subroutines functionality: 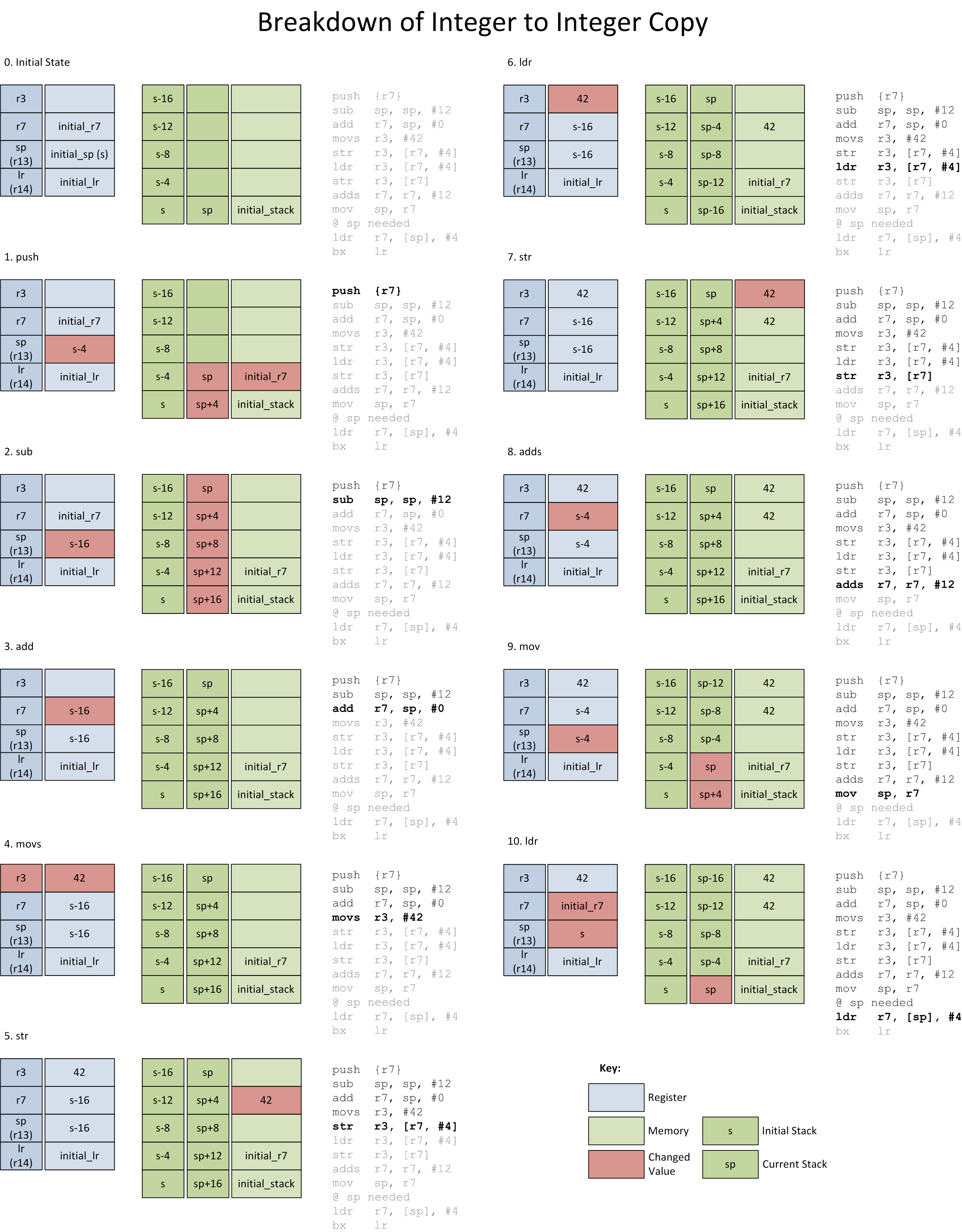 What is going on with r7?

The compiler has used some of the CPU’s precious cycles to ensure the value of r7 is preserved while this subroutine executes. Why does it bother preserving the mysterious contents of this register?

It turns out it’s because the Procedure Call Standard for the ARM® Architecture (ARM IHI 0042) has stipulated as much. This document is part of the ARM ABI (ABI Stack Overflow description) and outlines how compilers should behave in order to enforce some consistency in the compiled code; to allow for the possibility of interoperation. It states:

A subroutine must preserve the contents of the registers r4-r8, r10, r11 and SP (and r9 in PCS variants that designate r9 as v6).

Before the compiler can use r7 as a working register, it must store r7’s current contents somewhere safe - on the stack. Before the subroutine exits, it must also ensure r7 is set back to its initial value. Ensuring that from the perspective of the calling routine it will appear as though nothing has changed.

So why not use one of the other registers which don’t have to be preserved? Again the same document has rules on this:

Typically, the registers r4-r8, r10 and r11 (v1-v5, v7 and v8) are used to hold the values of a routine’s local variables. Of these, only v1-v4 can be used uniformly by the whole Thumb instruction set, but the AAPCS does not require that Thumb code only use those registers.

The first four registers r0-r3 (a1-a4) are used to pass argument values into a subroutine and to return a result value from a function. They may also be used to hold intermediate values within a routine (but, in general, only between subroutine calls).

Presumably GCC is following this recommendation. However, since this function takes no arguments, the compiler should be able to ignore this suggestion and save some cycles by using a register from r0-r3. I would guess it may well do this if optimisation was enabled.

You may have noticed the 6th instruction is an LDR which loads r3 from stack memory after just writing r3 to the same location on the stack. I found this behaviour rather peculiar and I haven’t been able to find a valid explanation for it. My guess would be this is a quirk of GCC.

If anyone has any better suggestions as to why this instruction is present, feel free to let me know.

Moving onto other type conversions - what should happen during a signed to unsigned, or unsigned to signed integer conversion?

I don’t happen to have a copy of the C99 standard handy, but instead went Googling for answers and found what I assume to be the valid answer on Stack Overflow.

Since ARM processors use two’s complement format to represent negative numbers, when converting between signed and unsigned integers the bit pattern remains unchanged. No additional processing is required, so the generated instructions are identical to the integer to integer example.

The value interpreted from the bit pattern may of course change, for example a negative signed number being converted to an unsigned number will change in value.

The next focus will be the assembly instructions generated when the output data type is either larger or smaller than the initial data type.

From this point on, only the instructions which are relevant to the conversion will be documented. The initialisation and cleanup of the subroutine should closely resemble the integer to integer conversion that is listed above.

As per the int to int example, there is a store onto the stack followed by a load. However, the setting of the second stack variable, the char y, is achieived through the STRB variant of the STR instruction. The B postfix on STR signifies that only a single byte should be copied. The stack offset specified to store this value is also different from the integer to integer subroutine, with 3 being specified instead of 0.

Similar to the int to char example we see the character variable being stored onto the stack via STRB (since the value 42 fits into a single byte). It is re-loaded into register r3 via LTRB. The ARM documentation notes LTRB has the following useful property:

This ensures that before the second STR saves all 32 bits of r3 to the stack (to create y), the most significant three bytes of r3 are already set to zero.

Floating point numbers have a drastically different binary representation than integers. While some manufactures have their own method of representing floating points, many, including the ARM Cortex-M4F, support the IEEE 754 standard.

Hardware floating point support in the ARM Cortex-M4 line is optional (its inclusion is often denoted by referring to the core as Cortex-M4F). Without this hardware, calculations and conversions involving the float datatype all have to be achieved via software routines. With the hardware, the compiler can make use of floating point instructions to improve performance.

The following is the C source code provided to GCC:

The integer is loaded into r0, before the subroutine calls out to __aeabi_i2f with BL. Presumably this conversation routine reads r0, converts it to a float then stores the converted value back to r0 before returning.

FLDS loads floating point register s15 from the saved value of x on the stack. This register is converted to a signed integer using FTOSIZS. FMRS moves the integer to an ARM register to then be written to the stack to represent y.

The subroutine __aeabi_f2iz is used to convert the floating point number contained within r0 into an integer.

I noticed that the generated assembly was loading negative numbers into a register in a peculiar way.

To investigate in more detail I modified the return value of an otherwise empty function with a handful of low value integers. This was used to produce the table below which shows the desired return value and the corresponding instruction used to load the register.

The MOV (and MVN) instructions can take an immediate integer value in the range 0-65535. Immediate values are obtained by reading bits encoded into the instruction’s binary pattern (as opposed to being stored and loaded from a known memory address). The particulars of instruction encodings are documented in ARM®v7-M Architecture Reference Manual (ARM DDI 0403E.b (ID120114)) (to obtain this document ARM requires you to register on their website).

This explains how the values 3,2,1,0 can all be loaded via the MOV command. The values -3 and -2 are outside the available range (0-65535) so cannot be obtained in the same manner. Instead the compiler takes advantage of two’s complement binary representation to allow these numbers to still be encoded as immediate values.

To obtain the correct binary representation of a negative number in two’s complement the following operation is performed:

The compiler performs this calculation on -2 and provides the output, 1, as the immediate value to the MVN instruction. When executed the destination register is populated with the value of NOT(1) which is the appropriate bit pattern of -2.

Looking at the possible formats of the MOV instruction, one of them takes a “Operand2” argument which is a “Flexible second operand". This documentation states this allows the loading of:

any constant of the form 0xXYXYXYXY.

Considering the case where X=F and Y=F we get 0xFFFFFFFF which is the binary representation of -1.

Presumably the compiler performs the logic to check against this encoding before attempting other formats, otherwise it likely would have settled on mvn r0, #0 to give the same result.

At some point ARM updated the mnemonics used for the floating point instructions. The currently used set of instruction mnemonics is called the ARM Unified Assembler Language (UAL). It turns out that the version of GCC I have installed still outputs the older mnemonics. This isn’t a major issue since they all are encoded to the same binary pattern. Annoyingly though, ARM’s Cortex-M4 Instruction Set Summary only documents the newer UAL mnemonics.

I found the following page which provides a mapping between the old ARM mnemonics and the UAL versions. This is not complete however, and ARM has a more detailed reference in section “D2.3 Pre-UAL floating-point instruction mnemonics” of ARM®v7-M Architecture Reference Manual (ARM DDI 0403E.b (ID120114)). This document requires registration on the ARM website to access.

Playing Along at Home

The version of the GCC compiler I used here was part of the development environment I already had set up for STM32’s. However, I recently stumbled across the nifty Compiler Explorer website. It’s aimed more so towards C++, but it allows you to convert C source into assembly from a variety of compilers and compiler versions.